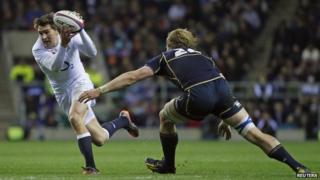 England have made a good start the Six Nations rugby tournament by beating Scotland.

The competition is a series of rugby matches between six countries: England, France, Wales, Scotland, Ireland and Italy.

Earlier on, Ireland stormed to a huge early lead against Wales in Cardiff and held on to win 30 points to 22.

France take on Italy in Rome at three o'clock on 3 February.