Mystery of how owls spin their head is solved 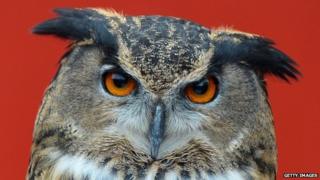 Until now it's been a mystery... how do owls spin their heads right round without hurting themselves?

The nocturnal birds, famous for their "twit-twoo!" sounds, can turn their heads almost full circle - a whopping 270 degrees.

Scientists who were wondering how this was possible say they have now come up with an answer.

Owls have special bones and arteries in their necks that won't twist or snap.

Also their neck bones are more spaced out than ours, which helps them move them much further.

It's a handy trick for them too, as an owls eyes are in a fixed position. This means they can only see in one direction unless they turn their heads.

If a human was to try and do the same thing it would be really dangerous and they would pass out.