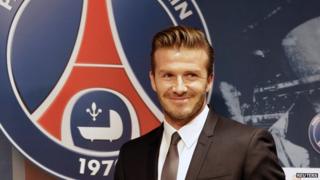 Beckham left the LA Galaxy in December. Since then there's been a lot of rumours about where he would play next.

But the 37-year-old was officially presented as a PSG player on Thursday afternoon, and he'll be there until the end of the season.

He has promised to donate all of his wages from PSG to a local charity.

Big-spenders PSG are currently top of the French league and have stars like Zlatan Ibrahimovic in their team.

Beckham made a record 115 outfield appearances for England, and has played for some of the biggest football clubs in the world - including Manchester United, Real Madrid and AC Milan.