Should we tax sugary drinks to help kids' health? 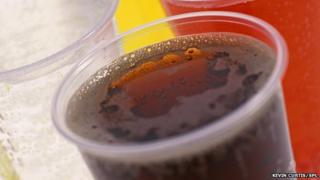 There are calls to up the cost of sugary drinks - to help kids' health.

Over 60 groups, including doctors, are backing a 20p tax per litre, which would go to the government.

Food and farming charity Sustain thinks it'd raise more than £1 billion a year, which could be spent on healthy school meals, free fruit and veg, and cooking classes.

But soft drink companies say it's not necessary and they're already helping to fight child obesity.

Alcoholic drinks and cigarettes have taxes put on them to try and stop people from buying too many of them.

So do you think raising the cost of sugary drinks would work?

Would it put you off if sugar drinks cost a bit more? Or perhaps you reckon it won't make a difference?

This comments page is now closed. Here are some of the comments you sent it.

"Taxing sugary drinks won't make people want to buy it less, they will still buy it. However it will make the government richer and the people poorer."

"We should have our own free choice on drinking pop. I am sensible and do not need to be forced to drink less by making pop too expensive!"

"We think that the price of fizzy drinks should not be increased. It should be parents that prevent their children from buying the drinks. We also think it will not make a big difference in the number of people that buy the drink, but the government will definitely benefit!"

"I think we should pay more because then people wouldn't buy them so often and we would be healthier!!"

"I don't think we should put a tax on soft drinks because right now they are just about pocket money price. I only have sugary things on a Saturday so I like to treat myself by buying a fizzy drink with my pocket money."

"Yes soft drinks are very fattening and there should be a small tax on them to try and get people to drink a healthier alternative like water."

"I am diabetic so when I hypo, which means that my blood sugar goes low, I need fizzy drinks to put it up, so raising the price is not fair."

"I think it is a good idea because it may be too expensive for children to buy. If children can't buy the high sugar drinks then they will be healthier."

"No we should not pay more for fizzy drinks as already we pay enough."

"Fizzy drinks should stay the same but lower the prices of water and juice because more people will buy them as fizzy drinks and juice are the same price at the moment."

"The price of drinks is already ridiculous! How do we know that's where the extra money would go?"

"No because it is already too pricey. It should stay the same because kids are just spending more of their money."

"I think that they should raise the price because then when we go to the dentist it won't hurt!"

"I think they should tax sugary drinks. If people find that it costs more then they won't buy it. Less people will get ill and it will help kids health."

"I think they should not put sugary drinks up because it is a bit too expensive already!"

"I think that fizzy drinks cost too much already. If the price goes up they will be bought a lot less and the government won't get any tax."

"No, because there is no point in taxing things that people like. If you tax them them it's not really going to make a difference."

"I think we should tax sugary drinks but not the ones with sweeteners. All the money raised should be spent on schools or stuff for kids because we buy most of the bottles and cans."