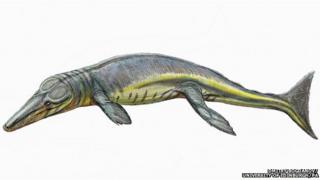 A prehistoric ocean predator that was part crocodile, part dolphin has been identified by scientists.

The discovery was made from bones found near Peterborough more than 100 years ago!

The creature had pointed, saw-like teeth and a large jaw - good for gobbling up large prey.

A team of experts led by the University of Edinburgh studied the bones, which have been held at a museum in Glasgow since they were found in the early 1900s.

They hope the discovery will help them understand how marine reptiles were evolving 165 million years ago.