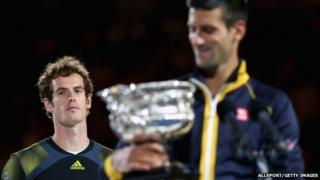 The Serb was the stronger man, winning in four sets as Murray struggled to cope with blistered feet.

"I played a good second set," said Murray. "I created quite a few chances, but didn't quite get them."

Djokovic became the first man in 46 years to win for three years running in Melbourne.