Aston Villa knocked out of second cup in a week 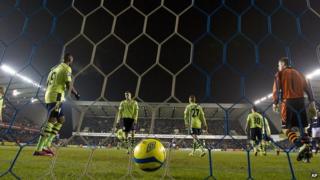 Aston Villa have been knocked out of their second cup in a week to a lower league team!

This time, Villa were beaten by Championship side Millwall in the FA Cup.

Earlier in the week, they were beaten to a place in the League Cup final by Bradford City.

It means the pressure is on boss Paul Lambert to turns things round for Villa, and there's much talk about the chances of him losing his job.

Darren Bent gave Villa the lead, only for Danny Shittu and John Marquis to score for Millwall to set up the famous win.

There's a full fixture list of FA Cup games this weekend. If you like an FA Cup shock, keep your eye out for Arsenal's trip to Brighton and Macclesfield's game against Premier League Wigan on Saturday.

And on Sunday, Chelsea travel to London rivals Brentford, Tottenham take Leeds and Oldham host Liverpool - all of which could be the scene of a famous cup shock.

So here's a full guide to the games taking place and the time they kick off!