The Environment Agency changed its mind on Thursday, saying that building snowmen wouldn't significantly reduce the risk of flooding.

A spokesman had said that building snowmen could reduce the risk, because compacted snow melts more slowly.

But the agency has now confirmed that snowmen won't make much difference.

It says that while building snowmen is great fun, it's unlikely to make a big enough difference to the overall rate at which the snow melts.

But some experts have said that there is some truth in the idea.

Dr Simon Cook, an ice expert from Manchester Metropolitan University, says: "You'd have to build a lot of snowmen to reduce the impact of flooding.

"But there is a grain of truth in the fact that if you compact it, and make a snowman, it makes it a lot harder for that warmer air to get in and melt the individual snow grains."

To significantly reduce the risk of flooding, it seems we'd all have to build many millions of snowmen.

Not sure how to make a snowman? Check Newsround's handy guide! 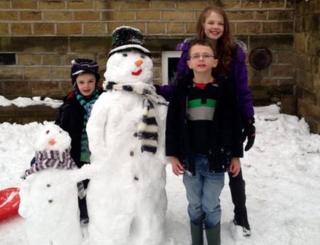 Tom, Jack and Eve from West Yorkshire sent us this picture of their snowmen

By the amount of pictures you've been sending us of snowmen - it's obvious you guys still love making them.

Check out more of your snowmen pictures