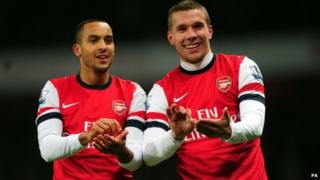 Arsenal have recorded their first league win of 2013 after beating West Ham 5-1.

The Gunners had to come from a goal behind and scored four goals in 12 second half minutes.

Jack Collison put West Ham ahead with a volley before Lukas Podolski equalised with a stunning goal.

Arsenal dominated after the break and goals from Giroud, Cazorla and Walcott put the game to bed.

West Ham sit 12th in the league and Arsenal remain sixth but have cut the gap on fourth-place Tottenham to four points.