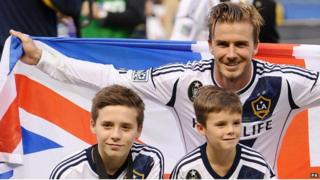 There are reports that David Beckham's eldest son, Brooklyn, has signed for Chelsea's youth side.

13 year-old Brooklyn, the eldest of Beckham's four kids, was pictured having a trial on Tuesday at Chelsea's Cobham training base in Surrey.

It's thought he took part in an under-14 training match.

Brooklyn's dad David isn't with a club at the moment and is working out where he'd like to play next. Some think he may join a Premier League side.

When dad David was playing for American side LA Galaxy, Brooklyn was in the youth team there.