TV crew and travellers stranded in the snow in Somerset

People in parts of the UK are still struggling with the effects of heavy snow.

It's been falling thick and fast mainly in the south-west of the country over Tuesday and into Wednesday.

In Somerset, the snow was so bad it left travellers stranded, including a BBC TV crew who were filming there.

Jon Kay and his team, who were reporting from the Mendip Hills, had to stay with a family who lived nearby. 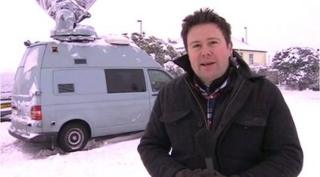 The BBC's Jon Kay in Somerset

Weather experts say more snow is on the way and to watch out for ice.

There are yellow weather warnings in place for south-west England, parts of the midlands, Wales and also in eastern Scotland.

This means forecasters think people should be prepared for the snow as it could disrupt travel.