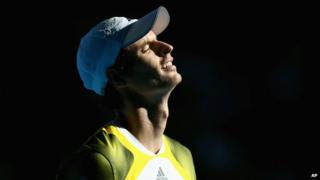 Andy Murray is through to the semi-finals of the Australian Open for the fourth year in a row after a ruthless win against France's Jeremy Chardy.

It means the British number one has not lost a single set in the tournament.

After beating Tsonga, Federer said he was looking forward to playing Murray again: "It's going to be tough. [Murray] had a great year last year, winning his first Grand Slam and Olympic gold.

"He is a great guy and a great player," he continued.