Comments: Do you have gaming grandparents? 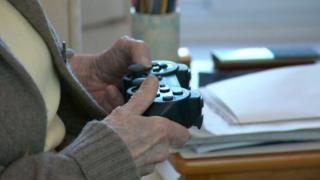 An 85-year-old pensioner says she loves playing video games with her aunt who is 94!

Hilda Knott has been playing video games for 40 years, but says she still loves all the latest releases.

The gaming granny said: "I enjoy finding something new. I also like having the achievement of finishing the game."

Do you play video games with older relatives?

Do you enjoy playing against your parents, grandparents or even great-grandparents? How different is it to playing on your own or with your mates?

Here's some of your comments:

"When my nana came over we played Fifa 12 and she beat me!"

"My grandma thought a PS3 was a band and an Xbox was a drink."

"My granddad plays Minecraft on my iPad, he also plays Fruit Ninja and Temple Run!!"

"My nan likes to play Space Invaders on her laptop, she also plays Tap The Frog on my Kindle."

"My grandparents love technology they have and iPad, iPhone, PS3 and a iMac."

"My granddad plays on his Nintendo DS and he swaps games with me."

"My granddad is always on his iPad playing games."

"When my granny came round to give me my presents I gave her a game of Just Dance 4 and she beat me!"

"My nan loves video games on the Wii but she absolutely hates violent games as do I."

"When I go round to my granddads he sometimes plays temple run on his tablet."

"My grandma always plays computer games but my granddad doesn't."

"When my grandparents come to visit me they play golf and tennis on the Wii with me."

"My gran plays loads of computer games. There is no school to go to in her house so she's always on her computer."

"My gandparents have never heard of an Xbox."

"My gran plays Fruit Ninja on my ipad."

"My gran doesn't really play games but she does Gangnam Style."

"My granddad loves to play little Big Planet 2 and I think it's really fun to play it with your granddads!"

"My great-grandma is 89 and she just got her new ipad yesterday we are all giving her lessons on how to use it."

"My grandpa and grandma play FIFA and Mario Party 9! But Minecraft is there favourite."

"My granddad Melvin has a Wii, PS3, PS2 and an old Game Station. I really look forward to going there."

"My granny has just got an ipad and she rings us up every two hours to tell us how do you send a email or download an app."

"My grandparents love playing against each other on their Wii."

"My nan and granddad have a Wii and we go round there and play."