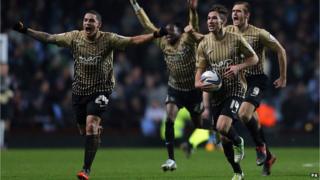 League two side Bradford City have reached the Capital One Cup final after beating Aston Villa over two games.

They have become the first fourth-tier side in over 50 years to get to the final with a 4-3 aggregate victory over Premier League Villa.

Despite losing 2-1 on the night, Bradford fans were in dreamland at the final whistle.

Phil Parkinson's League Two side will face either Swansea City or Chelsea at Wembley on 24 February.

Are people missing from your class due to Covid?

Stunning photos of the Northern Lights captured in Scotland