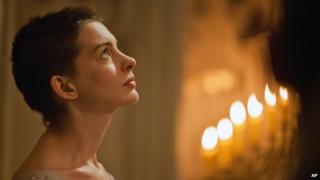 The soundtrack to Oscar-nominated movie Les Miserables has become the first recording by a cast of a film to top the UK album chart in 16 years.

It has knocked Brit-nominated Emeli Sande's best-selling album Our Version of Events into second-place.

The last musical to take the number one slot was Evita, which starred Madonna, in 1997.

Les Mis is also a hit stage musical which has been seen by more than 60 million people all around the world.

The movie, starring Hugh Jackman, Russell Crowe and Anne Hathaway, tells the story of an escaped prisoner in France over 200 years ago.

The soundtrack features live vocals recorded by the actors on the set of the film.