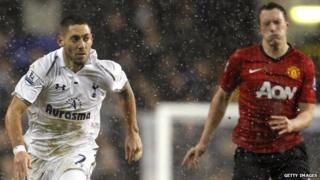 The gap at the top of the Premier League has closed to 5 points after Tottenham Hotspur grabbed a late goal to draw 1-1 with Manchester United.

Sir Alex Ferguson's side were denied a win when Clint Dempsey scored for Spurs in the 92nd minute, cancelling out Robin Van Persie's first half goal.

Manchester City, who are in 2nd place, kept up the pressure on their rivals with a comfortable 2-0 win over Fulham on Saturday.

Chelsea stay in 3rd after beating Arsenal 2-1 at Stamford Bridge.