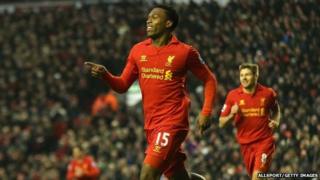 Jordan Henderson, Luis Suarez and Steven Gerrard also scored for the Reds at Anfield, before an own goal from Ryan Bennett of the Canaries.

Manchester City beat Fulham 2-0 at the Etihad to narrow the gap between them and Manchester United at the top of the table.

City are now just four points behind United, having played one more game.

Newcastle's miserable run continued as they lost at home 2-1 to Reading, despite taking a one goal lead in the first half.

The Magpies were booed off by fans. They're sitting just two points above the relegation zone.

There are two big games on Sunday - Chelsea host Arsenal, and Manchester United travel to Tottenham.