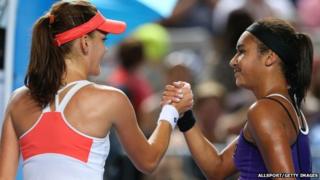 British tennis number one Heather Watson has been knocked out of the Australian Open.

She was defeated in her third round match by Agnieszka Radwanska from Poland in straight sets 6-3 6-1.

"I thought I had a good start to the match," Watson said. "I had chances early on to break but I wasn't able to convert."

It was the pair's second meeting - Radwanska beat Watson at Wimbledon 2012.

But Watson said: "I feel like I did a lot better this time than last time, and the score doesn't really show how I felt out there. I felt like I was in it and it was a lot closer."

Over in the men's competition, defending champion Novak Djokovic of Serbia beat Radek Stepanek from the Czech Republic in straight sets 6-4 6-3 7-5.