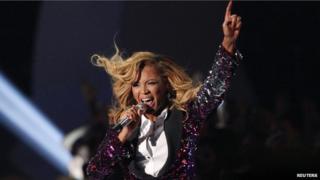 There are reports that Beyoncé will be performing live at the 2013 Brit awards ceremony in February.

It will be her first UK performance in nearly two years.

The singer isn't up for any awards but is promoting a reunion single called Nuclear with her former girl band, Destiny's Child. She's also working on her fifth solo album.

The star has recently gone back to work after giving birth to a baby girl named Blue Ivy last year.

Beyoncé last performed at the Brits in 2004, when she was named best international female solo artist.

One Direction, Muse and Mumford & Sons will also be performing at the event. All three bands have been nominated for 2013 British group.

The ceremony will take place at the O2 Arena in London on 20 February.