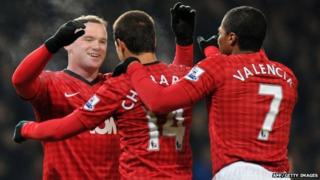 Manchester United and Arsenal are both through to the FA Cup fourth round after winning their replays.

Wayne Rooney scored the only goal in the 1-0 victory over West Ham. He missed a penalty later on.

The striker has been out with injury and was making his first appearance since Christmas.

United will now face Fulham, while Arsenal will take on Brighton.

In the Premier League, Chelsea threw away a lead to draw 2-2 with Southampton at Stamford Bridge.

Demba Ba and Eden Hazard both scored before the break to take the Blues 2-0 ahead.

But the Saints fought back, with second half goals from Rickie Lambert and Jason Puncheon.