Watson through to third round of Australian Open 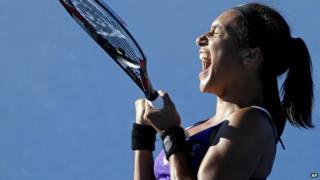 Heather Watson has produced another remarkable display at the Australian Open, coming back from three match points down to beat Ksenia Pervak.

Fans thought the British number one was on her way out. At one point, she was trailing her opponent by a set and was losing 6-3 in the second set tie-break.

She will now play in-form fourth seed Agnieszka Radwanska in the last 32.