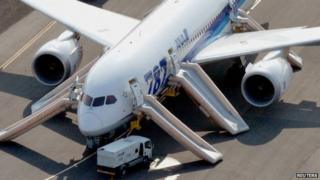 Seventeen dreamliner planes in Japan have been grounded after battery problems forced one to make an emergency landing.

The plane had to land after reports of a burning smell and smoke in the cockpit.

The new Boeing 787 Dreamliner planes have had other faults in recent weeks including brake problems and fuel leaks.