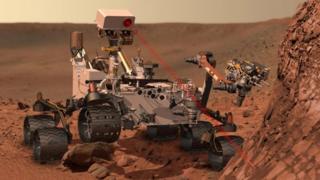 After five months on Mars the Curiosity rover is ready to start drilling on the Red Planet.

The US space agency hope the drilling will give them a better idea of what the planet is made up of.

They also want to see if they can find any evidence that the planet once sustained life.

The drilling will take a long time because the drill mechanism needs to be cleaned of any contaminants that might have journeyed to Mars from Earth.

Curiosity has already identified evidence that water may have once flowed on its surface. It found rock deposits that could have been laid down in a streambed billions of years ago.