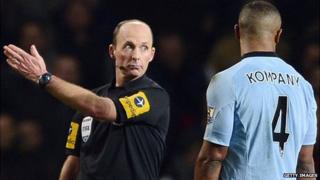 Manchester City defender Vincent Kompany has had his red card against Arsenal overturned.

The centre-back was sent off for a tackle on Jack Wilshere on Sunday.

Manchester City appealed against the decision and the Football Association agreed he shouldn't have been dismissed.

If the red card hadn't been overturned, Kompany would have faced a three-game suspension.