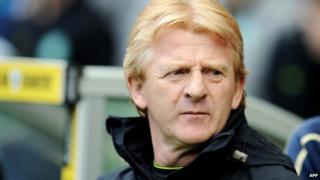 Scotland have got themselves a new manager after Gordon Strachan agreed to take on the role.

The national team have been without a manager since November after Craig Levein was sacked following a run of poor results.

Gordon Strachan has lots of experience having managed Celtic and Middlesbrough in the past.

He also played for Scotland 50 times and featured in the teams 1982 and 1986 World Cup finals campaigns.

This will be Strachan's first job in management since leaving Middlesbrough in October 2010.