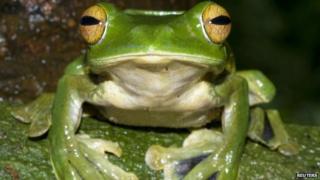 An Australian researcher who discovered a new species of flying frog near Ho Chi Minh City in Vietnam has revealed how she found it.

Jodi Rowley discovered the frog in 2009 but thought it was an ordinary flying frog.

But at closer inspection she noticed differences in the colour of the webbing and the size of the frog.

Jodi named the new species Helen, after her mum.

What made the discovery so special was how close to such a big city the frog was living.

Researchers are now working to establish whether Helen's frog is endangered.