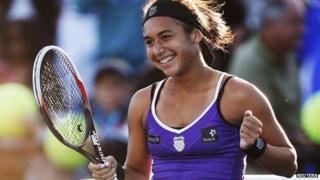 British star Heather Watson has smashed her way into the second round at the Australian Open tennis tournament.

She was trailing behind to begin with, losing the first set, but then fired through to win the match 2-6 6-3 6-2. She beat Romania's Alexandra Cadantu.

The Australian Open's one of the major tennis tournaments in the world and is being held in the city of Melbourne.