Fewer kids walk to school on their own 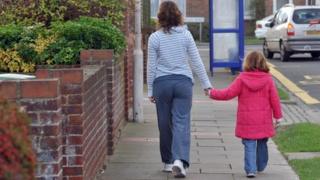 A new study has revealed that primary school children in England have less freedom compared to kids 40 years ago.

Now one in four primary school children travels to and from school alone.

In the early 1970's almost nine out of ten children did the journey without an adult.

The report compared school children in England to those in Germany where three quarters were allowed to travel home by themselves.

Some charities think you should be given more freedom because they say it's an essential part of growing up.

We asked you if you go to school by yourself or if you have to go with an adult?

"I feel that going home alone is good. It makes you feel independent and trustworthy to your parents."

"I walk home on my own as I think it's important that every child has a bit of freedom!"

"I walk to school alone, I think that if parents can trust you then you should be able to because then it shows independence and trust."

"I get dropped off near my school and walk all the way from there. I think that when you are under 8 or 9 you should not walk on your own."

"I don't think that children should walk to school or back without adult supervision just in case they start talking to a stranger or they hurt themselves on the road."

"I get the car to school and walk home with my friends. I think it's a bit dangerous for kids under 10 to go to school alone."

"I always walk to school on my own but it depends on your age and you have to ask your parents first. Sometimes I walk to school with my friends so I'm not alone."

"I walk to school with my mum as she works there. She says I am not allowed to travel to school alone until I am in Year 6."

"I travel to school alone because it is only 2 minutes away and I only have to cross one road. My dad does pick me up from school in the winter when it gets dark."

"I think children should go to school alone because when they are older they would need to go by themselves but they won't have experience."

"I'm only just allowed to walk to school on my own and I'm in Secondary, but I do think that people underestimate how potentially dangerous walking alone is."

"I go to school on my own. Sometimes with my friends."

"I am not allowed to walk to school and I always go in a car which is really not fair and its embarrassing."

"I walk to school alone. I find it good but sometimes if you're younger it's safer with an adult."

"We travel to and from school alone and think that children under 8 should be walking without an adult as long as they're safe."