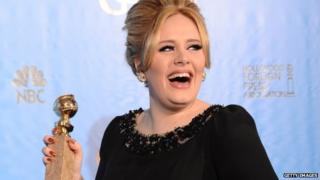 British singer Adele has won a Golden Globe for her theme to the James Bond film Skyfall.

She bagged the Best Song gong at the Hollywood ceremony and thanked her newborn son during her acceptance speech.

The Golden Globe awards are held every year and are a major ceremony in the world of film and television.

Ben Affleck's film Argo was another big winner on the night - the film won the best drama award and Affleck was named best director.