The wreck of the Costa Concordia cruise ship in Italy will be removed by September at the latest, officials say.

It has been lying on its side in the water since it hit rocks and sank off the Italian coast exactly a year ago.

Survivors and relatives of those killed will attend ceremonies to mark the anniversary on the Tuscan island of Giglio where the ship overturned.

More than 4,000 people were on board when the disaster happened.

Captain Francesco Schettino steered the ship too close to shore while trying to show it off to islanders, and hit a rock.

He is accused of manslaughter, causing a shipwreck and abandoning ship before all the passengers were evacuated. 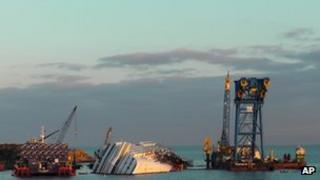 Hundreds of workers are involved in what has been described as one of the most difficult marine salvage operations ever.

Because the ship lies in a marine nature reserve, cutting it up could be very damaging to the local environment.

Instead, it will be lifted upright and towed to shore, where it will be dismantled.

The local islanders say they are desperate to see it go, as they depend on tourism.

Although the wreck has attracted some visitors, locals say they only come for a short time and spend almost nothing.

They say the long-stay tourist trade has been cut by at least 40%, because people do not want to spend their holiday where a big salvage operation is taking place.