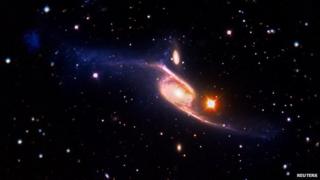 Astronomers have spotted the largest known spiral galaxy - by accident.

A spiral galaxy is made up of stars, gas and dust which rotate around a central group of stars.

Scientists knew the galaxy, called NGC 6872, existed but only discovered how big it was when they were studying areas around it.

They were shocked to see a large amount of ultraviolet light from young stars, making the galaxy big enough to fit five of our Milky Way galaxies in it.

It's thought the galaxy was made much bigger after a nearby galaxy, called IC 4970, crashed through the spiral.

Experts from America, Brazil and Chile were interested in a number of regions away from the galaxy when they made the discovery.

Rafael Eufrasio from the Catholic University of America said: "I was not looking for the largest spiral - it just came as a gift."

The spiral galaxy is about 212 million light-years away.