Snake clings to wing of plane 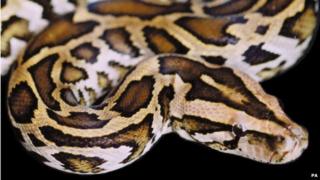 A three-metre long scrub python held on to the wing of a plane during a flight lasting nearly two hours.

Passengers watched on as it battled against wind speeds of 250mph and a temperature of -12 C.

Despite clinging on all that time, the snake didn't survive the journey from Australia to Papua New Guinea.

One passenger, Robert Weber said: ''There was no panic. At no time did anyone stop to consider that there might be others on board.''

They feed on rodents and often hide in enclosed spaces to ambush their prey.

Charli and Dixie D'Amelio speak out about online bullying