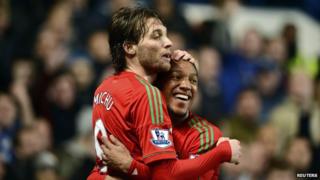 Swansea City have a two-goal advantage in the Capital One Cup semi-final after beating Chelsea for the first time in 87 years.

Goals from Michu and Danny Graham sealed the 2-0 win for the Swans at Stamford Bridge.

Demba Ba thought he had snatched a late goal for Chelsea, but it was ruled offside.

Swansea are firmly in front going into the second leg as they look to end a 100-year wait for a first major trophy.