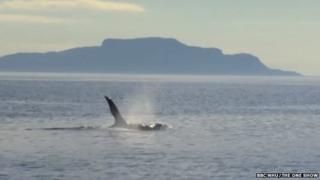 The UK's only known population of killer whales is at risk of dying out, marine life experts fear.

It's thought there are only nine whales left in the group, living in the sea between the north-west coast of Scotland and Ireland.

There are five females and four males, all of whom are older.

Scientists are worried because the group haven't had a calf, or baby, for 20 years.

Olivia Harries from the Hebridean Whale and Dolphin Trust said the group is "due to go extinct in our lifetime."

Studies by the Trust suggest the killer whales have become isolated from other groups in the north east Atlantic, meaning its harder for them to meet other whales.