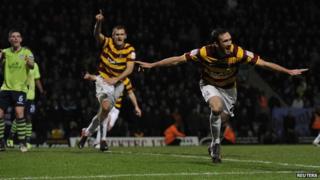 Bradford beat their Premier League opponents 3-1 to give themselves a real chance of getting through to the final.

"It is unreal. I can't believe we beat them. We thought we could get something but a 3-1 lead is fantastic."

Bradford are hoping to become the first team from the fourth tier of English football to reach the final of the League Cup in more than 50 years.

The Bantams, who beat Premier League Wigan and Arsenal on their way to the semi-finals, took an early lead through striker Nahki Wells.

Second-half headers from defenders Rory McArdle and Carl McHugh, either side of a goal for Villa's Andreas Weimann's, gave Bradford a two-goal cushion to take to Villa Park.