17 billion Earth-sized planets in our galaxy 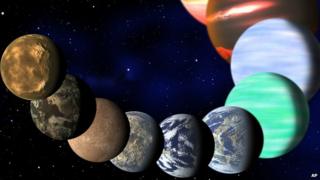 Astronomers say that one in six stars has an Earth-sized planet in a close orbit.

They gathered the information from Nasa's Kepler space observatory.

Kepler scientists now reckon there could be as many as 17 billion such planets in our galaxy.

They also announced 461 possible new planets, bringing the total number of planets found by the satellite to 2,740.

It looks for planets passing in front of stars, which it sees as tiny dips in light.