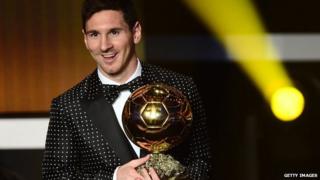 Lionel Messi has been awarded the Ballon d'Or for a fourth year running.

He beat Barcelona team-mate Andres Iniesta and Real Madrid's Ronaldo to the trophy, given every year to the world's best football player.

25-year-old Messi netted 91 goals in 2012, setting a new world record for the most goals scored in a year.

But despite having this super striker on side, Barcelona failed to win either the Spanish league title or Champions League.

'Too great for words'

Messi found out he was the winner at a ceremony in Zurich, Switzerland on Monday.

He was part of a three-man shortlist for the prize, which is voted for by journalists, and national coaches and captains.

He becomes the first player to win four Ballons d'Or in a row, breaking another record.

"To tell you the truth this is really quite unbelievable," the Argentine side. "The fourth award that I have had is just too great for words."