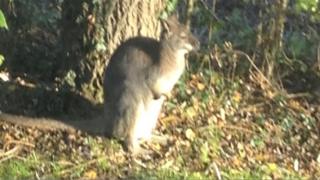 A family has found an unusual guest living in their garden - a wild wallaby!

The creature, which is normally found in Australia and parts of South East Asia, had made its home at the bottom of the Heathcote family's garden in Cambridgeshire.

Jane Heathcote said her family first spotted the animal the day after they moved in.

But nobody believed them until they took photos.

Reports of escaped wallabies living wild in the UK are not new.

There have also been sightings in Devon, Cornwall, East Sussex and Scotland.

When the family got in touch with the RSPCA, they told them it probably had a burrow nearby.

"They said he seemed happy and healthy and we should just keep an eye on him," Ms Heathcote said.

The family have named their new neighbour Wilf and say he likes to eat the food they throw out for birds and even plays with the local cats!