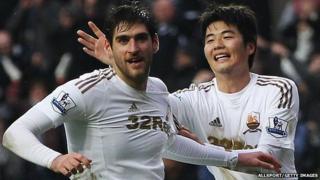 Swansea and Arsenal's third round FA Cup match ended in a dramatic 2-2 draw, with three goals in the final 10 minutes!

Spanish striker Michu gave Swansea the lead after coming off the bench in the second half at the Liberty Stadium.

Lukas Podolski equalised for the Gunners before Kieran Gibbs took them ahead just two minutes later.

But a replay was forced four minutes after that, when Swansea's Danny Graham hit one in the net to make it 2-2.

In Sunday afternoon's other FA Cup third round tie, Liverpool beat non-league Mansfield 2-1 to go through.