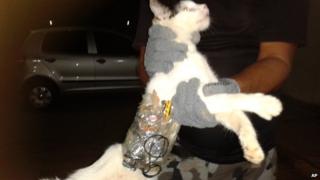 A cat has been detained after being caught smuggling goods to prisoners in Brazil.

The white cat was spotted by prison guards crossing the main gate to the prison in Arapiraca city with goods strapped to its body.

They found a mobile phone, charger, headphones and tools.

Staff at the prison say the cat would often come and go from the prison and think inmates there may have raised it.

They said the items could be used to attempt to escape from jail or for communicating with criminals on the outside.

The cat has been taken to a local animal centre where it's being looked after.