Adele and One Direction in top five US albums of 2012 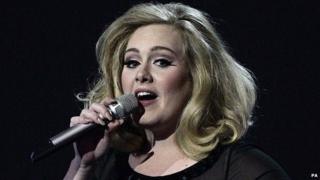 Adele's 21 has been crowned America's biggest album of the year - for the second year in a row!

One Direction had the third AND fifth top selling albums of 2012 across the pond. Up All Night sold 1.6 million and Take Me Home sold 1.3 million.

The 1D boys even kept Justin Bieber's Believe down in sixth place!

In an amazing year for British music, four of the five biggest albums were by UK artists.