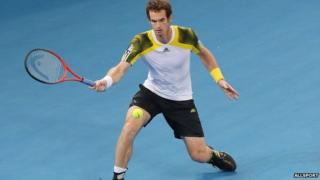 Britain's Andy Murray is into the final of the Brisbane International tennis tournament in Australia.

The world number three eased into the final when Japanese player Kei Nishikori had to retire with a knee injury in their semi-final.

Murray, who's the top seed at Brisbane, won the first set 6-4 and was leading 2-0 in the second when Nishikori called it a day.

Murray might have a slight advantage going the final on Sunday after only spending 45 minutes on court, whereas Dimitrov spent two and a half hours on court in his semi-final.

It's the perfect start to Murray's 2013 season and the build-up to the first grand slam of the year, the Australian Open.

In 2012, Murray lost to Novak Djokovic in the semi-finals there but after winning gold in the Olympics and the US Open, he'll be hoping to add another grand slam trophy to his collection.