AC Milan players walk off because of racist chanting 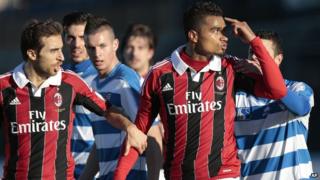 A friendly between Italian giants AC Milan and lower division club Pro Patria was abandoned after players walked off because of racist chanting.

Former Portsmouth and Tottenham midfielder Kevin-Prince Boateng sparked the walk-off by picking up the match-ball and kicking it into the crowd.

He then took off his shirt and was followed from the pitch by both sets of players and the match officials.

The Italian Football Federation has announced an immediate inquiry.

Milan said some of their other players including M'Baye Niang, Urby Emanuelson and Sulley Muntari also suffered racist abuse.

Kevin-Prince Boateng has received lots of support following his decision to walk off the pitch.

Manchester United defender Rio Ferdinand wrote Twitter: "If the stories about Kevin-Prince Boateng walking off the pitch with team-mates after being racially abused are true, fair play to him. Well done."