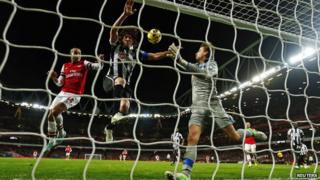 It's not everyday you get to see 35 goals scored in one day in the Premier League!

But footy fans were treated to just that on Saturday as the goals kept coming over eight matches.

Theo Walcott scored three times for the Gunners, and set up a further two goals as Arsenal climbed to fifth in the Premier League.

There were chants of "sign him up!" from the crowd, calling on Arsenal's manager Arsene Wenger to persuade Walcott to sign a long term deal with the club.

Walcott's Gunners contract comes to an end this summer and he is free to speak to other clubs from next week.

But after Saturday's match, Wenger said: "My desire is to extend his contract. He belongs here and hopefully we can do it." 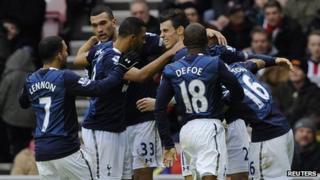 Tottenham Hotspur came from a goal down at half time to beat Sunderland 2-1 at the Stadium of Light.

Spurs now move up to third in the Premier League.

10 minutes later, Anthony Pilkington's free-kick gave hope to the Canaries but, despite the visitors having Samir Nasri sent off, Sergio Aguero added a third for the champions.

There were more goals in the second half as Norwich's Russell Martin scored twice either side of another Dzeko shot that went in off the post, meaning Man City won the match 4-3. 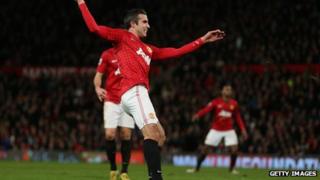 Elsewhere, Manchester United beat West Bromwich Albion 2-0 to stay at the top of the Premier League.

Wigan Athletic moved out of the relegation zone as they thrashed Aston Villa 3-0 at Villa Park.

There were six goals at the Britannia Stadium as Stoke City drew 3-3 with Southampton.

And Reading's Pavel Pogrebnyak's fifth-minute goal secured a vital 1-0 win for the Royals over West Ham.