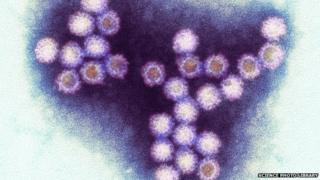 More than one million people could have caught the winter sickness bug called norovirus, according to experts.

The Health Protection Agency says there have been about 3,538 confirmed cases in England and Wales since the summer, 83% more than the same time last year.

But the HPA says that for every reported case around 288 go unreported, which means more than one million people could have had the bug.

Health Protection Scotland has also seen a rise in cases.

Norovirus is the most common cause of stomach bugs in the UK, affecting all ages.

Symptoms include feeling really poorly, being sick and having diarrhoea (runny poo).

The illness is not generally dangerous though, and most people make a full recovery within one to two days.

But norovirus can spread really quickly, especially in crowded places like hospitals and schools.

The best advice to stop it spreading is for people to wash their hands properly after going to the toilet and before eating.