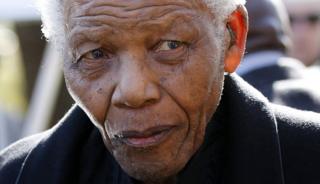 Nelson Mandela, the former president of South Africa, has returned home after spending Christmas in hospital.

The 94-year-old went in 18 days ago with a lung infection and gallstones.

Jacob Zuma the current president, said Mr Mandela was in "good spirits" and will continue to get treatment at home until he's fully recovered.

Nelson Mandela's one of the most famous men in the world, and news of his illness had many people in South Africa and across the globe worried.

He has been admitted to hospital three times in the past two years, but this has been his longest stay.

Mr Mandela's family said they were sad he couldn't be with them on Christmas Day, but he was visited by his wife Graca Michel and President Zuma.

Up until then, South Africa had been ruled by white people for more than 300 years.

Mr Mandela spent a lot of his life in prison after protesting against the way South Africa was run - a system called 'apartheid' which kept white and black people apart.

It meant that black people in South Africa had fewer rights and couldn't vote. White people controlled which jobs black people could have - and even where they lived.

Mr Mandela is now seen across the world as being responsible for helping to end the apartheid.