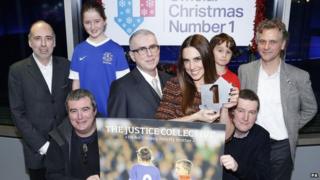 The Hillsborough tribute single He Ain't Heavy, He's My Brother is this year's Christmas number one.

X Factor runner-up Rebecca Ferguson and Spice Girl Melanie C are among the celebs who perform on the single.

It's raising money for the families of the Hillsborough victims.

The Hillsborough disaster happened in 1989 when 96 Liverpool fans died in a crush at a FA Cup semi-final.

The victims' families have been fighting for years against the original inquest verdict that their loved ones died accidentally.

That decision was thrown out at the High Court last week and a new inquest was ordered.