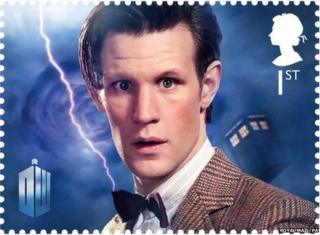 A special collection of Doctor Who stamps has been revealed by Royal Mail.

All 11 Doctors, from the very first actor William Hartnell to the current lead Matt Smith, will each get their own first class stamp.

The second class stamps will feature four of the show's most notorious villains, including the Daleks and the Cybermen. 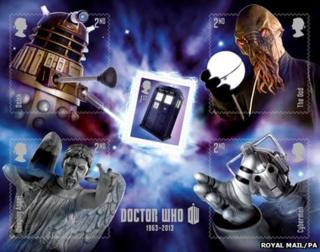 The collection has been designed to mark the sci-fi show's 50th anniversary next year.

The show first ran from 1963 to 1989, before returning to our screens in 2005 with Christopher Eccleston and then David Tennant as the time-travelling Doctor.

Andrew Hammond of the Royal Mail said the anniversary collection will "pay tribute to the brilliant actors that have played the Doctor over the years, as well as the adversaries that helped make the show so popular".

Fans of the show should expect "tremendous surprises" for the show's golden anniversary year, said head writer Steven Moffat. But they'll have to wait and find out as he's keeping them top secret.

"They wouldn't be surprises if I accidentally said them now, would they? But I promise you, we're going to take over television," he said.

The Royal Mail stamps will be available in March 2013.