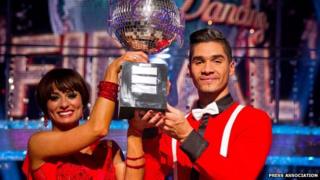 Smith, who won a silver medal at this year's Olympics, said: "I can finally say I won something in the year 2012!"

The 23-year-old was this year's youngest competitor.

He struggled in the opening weeks of the show and suffered several injuries throughout the series.

Strictly will return for a Christmas special on 25 December.

Former footballer Fabrice Muamba and 'JB' from JLS will be performing.