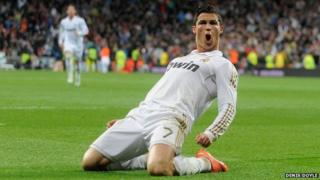 Cristiano Ronaldo says he will not celebrate if he scores against Manchester United.

The Real Madrid striker will go head-to-head with his old club after the Spanish side were drawn against the Reds in the last 16 of the Champions League.

What Ronaldo won with United...

"I won't celebrate if I score. It is thanks to Manchester United that I play for Real Madrid. Without them, I wouldn't be the player I am today."

United face Madrid at the Bernabeu on 13 February and then back at Old Trafford on 5 March.

It will be Ronaldo's first visit to Old Trafford since his £80 million transfer in 2009.

Click here for full details of the Champions League draw.